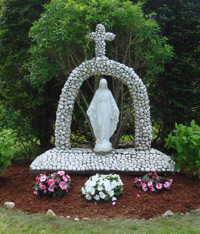 In 1878 and 1879, a small group of Catholics, mostly of Portuguese origin, were living on Martha’s Vineyard. In the summer, the numbers of Catholics would increase with the visitors on vacation.These people were without the opportunity of receiving the comforts and benefits of their religion. Wanting to celebrate their faith, a number of these people took steps to have Mass celebrated on the Island. An occasional priest from New Bedford or Sandwich would come to the Vineyard to celebrate Mass in private residences. Martha’s Vineyard, at this time, came under the jurisdiction of St. Lawrence’s Parish in New Bedford. Two men, Frank Magetts, a butler to a vacationing family in Cottage City; and John McGrath of Mansfield, purchased land and donated it for the Catholics of Martha’s Vineyard. The lot was the site of Sacred Heart Church in Oak Bluffs. The deed and a sum of money for building the church was given to Father McMahon of St. Lawrence’s Parish who became the first pastor on Martha’s Vineyard.

In 1880, with contributions from summer visitors and resident Catholics, a frame structure was erected. From 1880 until 1896, Mass was said during July and August in the new Sacred Heart Church of Cottage City. In 1896, Sacred Heart Mission was turned over to St. John the Baptist Parish of New Bedford, the first Portuguese Parish in the United States. From 1896 to 1903, various improvements were made to Sacred Heart Church, including a tower with a bell, a new altar, new pews, Stations of the Cross, a new furnace and a new organ. The sea shells used for the holy water came from Italy. In the winter, Mass was said on the third Sunday of each month. On February 1, 1903, Sacred Heart became a parish in its own right, and Mass was said each Sunday in Cottage City and at least monthly in Edgartown. Through the generosity of George D. Flynn, land in Edgartown was purchased on Pease’s Point Way. A parish rectory was also purchased for the priest to live in. From 1905 until 1909, the debt for the rectory in Oak Bluffs was paid off, and land was purchased on Vineyard Avenue for a cemetery. 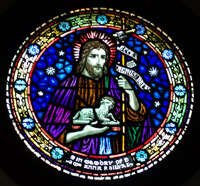 On April 25, 1906, James Lynch, a native of Ireland who settled in Vineyard Haven, generously turned over the title of land on the corner of Pine and Spring Streets to the Parish. This is the site of the original St. Augustine’s Mission Church, which was dedicated on July 27, 1911. Mass was now celebrated in Vineyard Haven and Edgartown twice monthly. Because of the increasing number of Catholics visiting the Island during the summer, plans were made for building Our Lady Star of the Sea Church in Oak Bluffs as a summer chapel. The cornerstone was laid in the summer of 1919 and the Church was completed and formally dedicated on August 22, 1920. The church cost $38,000 to build. On March 10, 1922, a fire of unknown origin broke out in St. Augustine’s Church in Vineyard Haven. The fire caused considerable damage to the sacristy and the sanctuary, with the altar and statues being almost destroyed. The community rallied together and reconstructed the almost destroyed section and beautified the rest of the church. 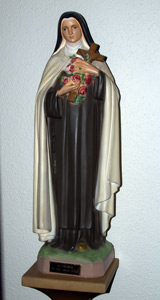 By 1924, the Church in Edgartown on Pease Point Way became too small to accommodate the growing Summer community. Land on the corner of Main and School Streets was purchased. One house was torn down and another was moved to its’ present location. This house is now the Parish Rectory. On December 1, 1924, the foundation was laid for the new church and on August 9, 1925, St. Elizabeth’s Church was dedicated. In 1934, it was deemed wise to make extensive repairs to Sacred Heart Church. It was decide to enlarge the original structure and make such alterations and improvements as would add to the appearance of the building. Two new altars were installed and a fifteen foot addition to the front was constructed. The work was completed at the end of September. The Golden Anniversary of Sacred Heart Parish was celebrated in February of 1953. 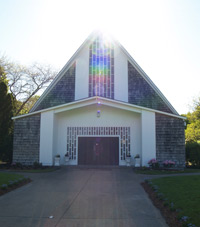 With the continued increase of parishioners at Vineyard Haven, St. Augustine’s was raised from mission status to a parish of its own on April 24, 1957. On May 18, 1956, the people of Vineyard Haven purchased a home on the corner of Church and Franklin Streets from Arthur Smith to be used as a rectory. On May 18, 1995, after 39 years of service, the building was sold to the Martha’s Vineyard Special Parents Association as a home for handicapped adults. On July 31, 1958, six Sisters of Notre Dame de Namur came to Martha’s Vineyard to teach religious vacation classes. The house next to St. Elizabeth’s Church in Edgartown was renovated for the Sisters to live in. The Sisters taught two weeks in Oak Bluffs and two weeks in Edgartown. The Sisters came back in the summer of 1959 to teach the children in the same religious vacation school program. On June 7, 1958, the men of Martha’s Vineyard decided to form a council of the Knights of Columbus, and Our Lady of Lourdes Council was established. This council fell dormant in the 1970s and at present the men of the three parishes are attempting to instill new life into this council. In 1963, Sacred Heart Church was converted into a Parish Hall. Our Lady Star of the Sea Church, originally built as the Summer, was converted to year-round use. 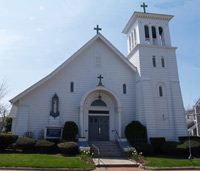 In 1969, St. Elizabeth’s Parish in Edgartown was declared an independent Parish. In the late 1960s and early 1970s, renovations and improvements were made both to Our Lady Star of the Sea Church and Sacred Heart Rectory. Weekly Church Bulletins were made available to the congregation. During the winter of 1995, Star of the Sea Church was closed for eight weeks and it was fully renovated inside. New lighting fixtures were added, the pews were refinished, the whole church was painted and new altar candles were added. The Church reopened for Easter.

The Catholic Church on the Island of Martha’s Vineyard has succeeded both materially and spiritually beyond all expectations. Before our eyes we see taking place the fulfillment of Our Lord’s prediction, when he likened His Kingdom on earth to a grain of mustard seed. All is due to the Master’s blessing upon the generosity, the spirit of self-sacrifice and the goodwill of our numerous Catholic people in the summertime, the increasing faithfulness of resident Catholics, the goodwill and kindness of our other friends from other church denominations, and the untiring zeal of the Priests who, over the years, have been sent to labor in this section of a far-greater Vineyard.

In 1996, Fr. Michael Nagle became pastor of the 3 island parishes. Beginning in 1997, the 3 parishes banded together to create one Religious Education Program, one Youth Ministry Program, one Parish Council and one Finance Committee. On May 2, 2004, Bishop George Coleman consolidated the three parishes into one new parish, The Good Shepherd Parish, with three Churches to worship in, St. Augustine’s Church in Vineyard Haven, Our Lady Star of the Sea Church in Oak Bluffs and St. Elizabeth’s Church in Edgartown.